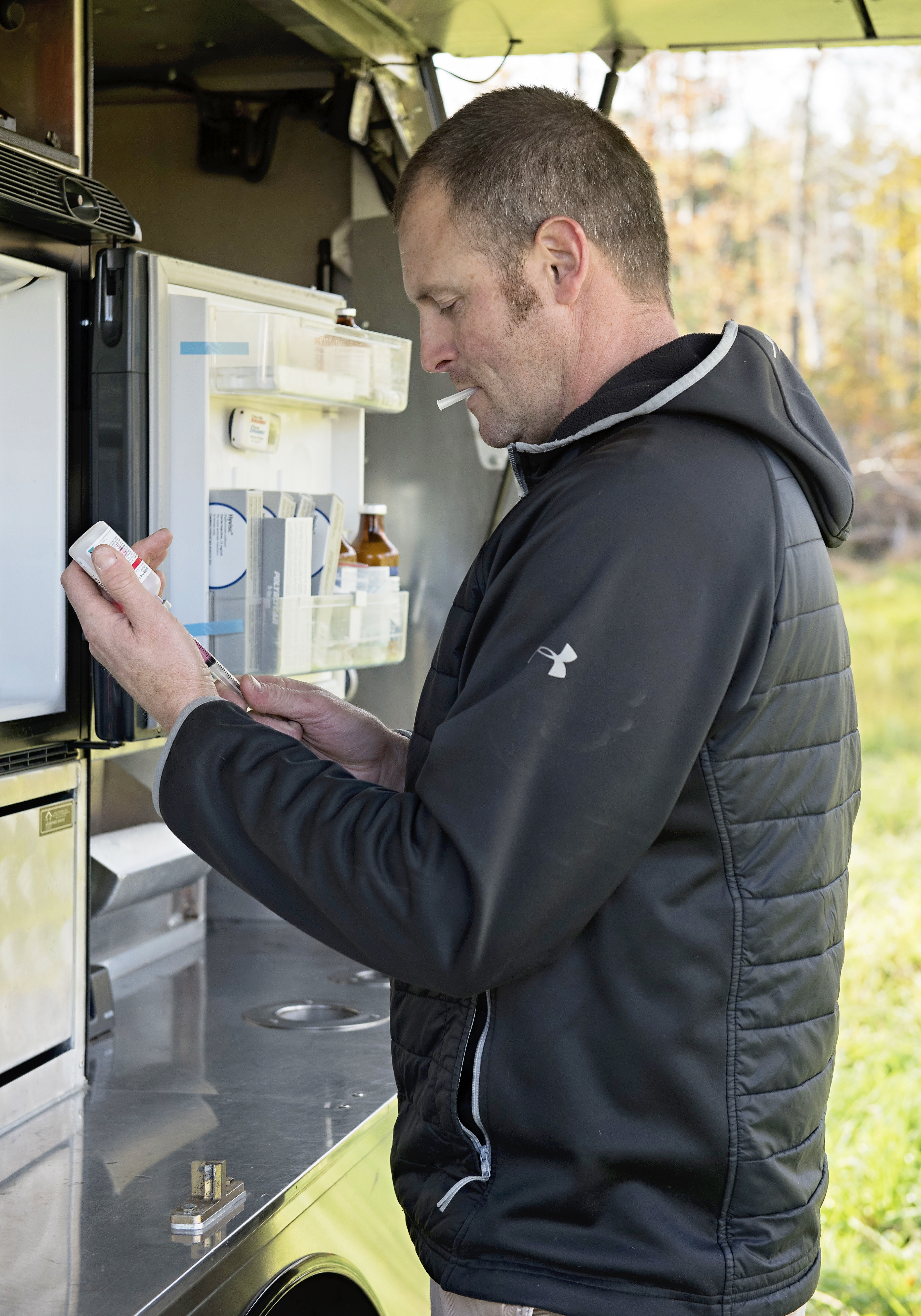 A good immunization program is a critical component of an equine health maintenance program and is essential to responsible horse ownership. Equine vaccines have been studied extensively, and are both safe and effective, when administered properly. It is devastating when we see a horse die of a disease that would have been easily prevented with vaccination. Our recommendations are based off of updated strategies for vaccinating horses provided by the AAEP, the American Association of Equine Practitioners, which is the largest group of equine veterinarians in the country. The AAEP has divided vaccinations into two categories: core vaccines and risk-based vaccines. Core vaccines are ones that every horse should receive, at least yearly, regardless of location, job description, or age. Elective vaccines are given to some horses based on risk factors such as location, travel history, farm dynamics, age, or other criteria. During your vaccine appointment we can further discuss you horse’s particular individual needs, since every situation is slightly different. Don’t forget that different parts of the country require very different vaccines and/or vaccine schedules, and if your horse is traveling into or out of New England, he may need additional vaccines.

So how do vaccines work? The goal of a vaccine is to prevent a disease (or at least lessen the severity of a disease if it is contracted) by exposing the immune system to the virus or bacteria that causes the disease in a controlled way. Exposing the immune system to the bacteria or virus that causes the disease should allow the body to defend itself if it has to fight off that disease in the future. We take a small amount of killed or modified disease-causing bacteria or virus, and we inject it into the horse with an “adjuvant” to “alert” the immune system that something is happening. White blood cells will come to the site of injection, pick up the vaccine particles and take them to the lymph nodes. An acute immune response is initiated, where some of the white blood cells become “trained” to fight this particular disease agent. This response isn’t immediate, however; it takes a few weeks. And if it’s the first time the immune system has seen this particular bacteria or virus, the response won’t last very long (perhaps 3-12 months, but it depends on the vaccine). To make immunity more permanent, a “booster” vaccine must be given. Think of it as a trial run for the immune system. The second exposure cements the immunity, creating “memory” white blood cells that will persist in the blood stream for a longer time which it depends on the vaccine, but is typically a year, which is why vaccines are done annually. 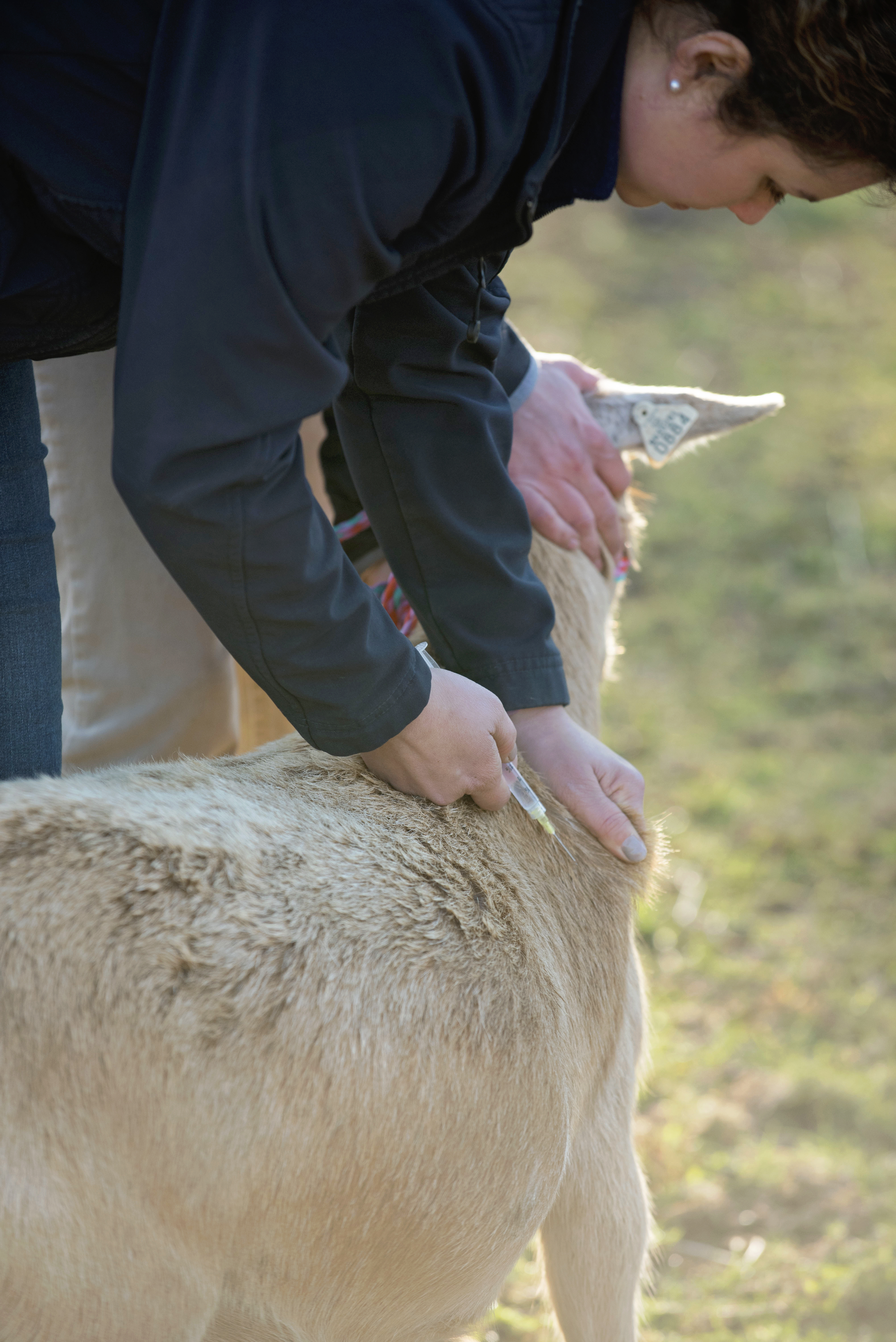 Rabies is a virus which is transmitted by the bite or saliva of an infected animal. All mammals can be potential carriers, but in this area bats, raccoons and skunks are the most likely culprits. Recently, several domestic cats in the New England area have tested positive for this virus. Also, in October, we had a rabies positive raccoon on our own farm in Townsend, Massachusetts! In animals, rabies is 100% fatal without vaccination, and in humans, rabies is also almost 100% fatal, with only a few reported cases of survival, even with intensive hospital care. The vaccine is (nearly) 100% effective when given properly. (No vaccine is 100%, but this one comes really close.) For your horse’s health, and for the health and safety of every human that comes in contact with him, do not skip this vaccine. It should be given once yearly to all horses. And while you’re at it, make sure to vaccinate ALL the other domestic animals on your property, including sheep, goats, camelids, dogs, and cats. *Also please note, that if your animals are not currently vaccinated, and are exposed to a potentially rabid animal, the local animal control officer will be involved, and your animals will likely be quarantined for a variable period of time*

EEE, WEE and WNV are all viruses that are carried by mosquitoes and can infect horses, birds and people. These viruses are transmitted to horses by mosquitoes, which have acquired the virus from birds and rodents. You can’t contract these viruses from your horse or even a bird – you (or your horse) must be bitten by a mosquito carrying the virus. These are all “encephalitis” viruses, meaning they cause inflammation in the brain. Dullness/depression can quickly lead to head pressing, inability to stand, seizures, and death. The good thing is, the vaccines are very effective. For horses that have never been vaccinated before, we recommend a booster vaccine 4 weeks after the first vaccine. Thereafter, horses in this area should be vaccinated once yearly in the spring, at least 2 weeks before the mosquitos emerge. The vaccines offer the best protection for about 6 months, and then starts to taper off. Therefore, if you live in an area with mosquitoes that are active for more than 6 months, revaccination at 6 month intervals maybe beneficial.

Tetanus “Lockjaw” is caused by the toxin-producing bacterium, Clostridium tetani. The spores of the bacteria are normally present in soil, and are very common in a horse’s environment. This organism can invade the body through a puncture wound, open cut, surgical incision, umbilical cord, or through the reproductive tract of postpartum mares and can be fatal unless treated. In an oxygen-deficient environment (“anaerobic”), these spores grow into bacteria, which begin producing their toxin. The toxin travels through the body, causing muscle spasms and rigidity. In a full sized horse, treatment is expensive and often not sufficient to prevent death; horses become unable to breathe due to spasms in their diaphragm. Once again, this highly deadly disease is very easy to prevent by vaccination. All horses should be vaccinated at least once yearly, and a booster vaccination is recommended if a wound occurs more than 6 months after vaccination. Since this vaccine is commonly bundled with EEE and WEE (in the E/W/T vaccine), it is usually given in the spring.

Equine Herpes and Influenza are both respiratory viruses, which are passed horse to horse via direct contact, aerosolized particles (sneezing/coughing), or “fomites” (objects that carry secretions from an infected horse to a non-infected horse, things like human hands, rags used for grooming, etc). They are usually not deadly, but can cause a respiratory infection which will certainly be bothersome, and can lead to secondary bacterial infections that may require extended treatment. Additionally, strains of the Herpes virus can cause abortion in pregnant mares, and a rare neurologic syndrome that can be deadly. We recommend that horses who travel for showing or training, or who live in large barns where horses come and go, be vaccinated twice yearly for these respiratory viruses. In addition, pregnant mares should be vaccinated with a specific (killed) strain of Equine Herpes virus at month 5, 7, and 9 of gestation, to help prevent abortion.

Strangles is another respiratory disease, but unlike Flu or Rhino, it is caused by a bacteria. Strangles is VERY contagious, and is easily passed from horse to horse through direct contact and sneezing/coughing, but also commonly through fomites such as buckets, grooming equipment, and humans. Strangles causes a fever, nasal discharge and LARGE swellings of the lymph nodes around the throat, so large that they sometimes restrict breathing (hence the name strangles). As scary as it is, Strangles is very rarely fatal unless a rogue infection becomes established internally (generally called “bastard strangles”… probably because of how nasty it is!). We prefer the intranasal vaccine, because it tends to have less systemic or inflammatory side effects. The intranasal vaccine uses a modified live culture of bacteria, and is sprayed up the nose.

Lyme Disease is a bacterial infection transmitted by the bite of a the deer tick. Recent studies of the deer tick population in our area, have shown that upwards of 30% of the ticks are positive for lyme disease! The symptoms of Lyme Disease in horses can be vague, but the most common include shifting limb lameness, overall stiffness, behavior changes or irritability, and joint pain. There is no Lyme vaccine licensed specifically for horses, but equine veterinarians (especially in the Northeast US) have been using dog vaccine off-label in horses. No significant side effects have been reported, and the research indicates that the vaccine may prevent infection in some horses, and lessens the severity of the disease in others. Due to the high prevalence of Lyme disease in the Northeast, we offer the canine Lyme vaccine (off-label) for all horses in our practice. The vaccine schedule for a previously unvaccinated horses is a primary vaccination, followed by a booster in 3 weeks, then another booster in 3 months. Thereafter, the vaccine should be given twice yearly (spring and fall). 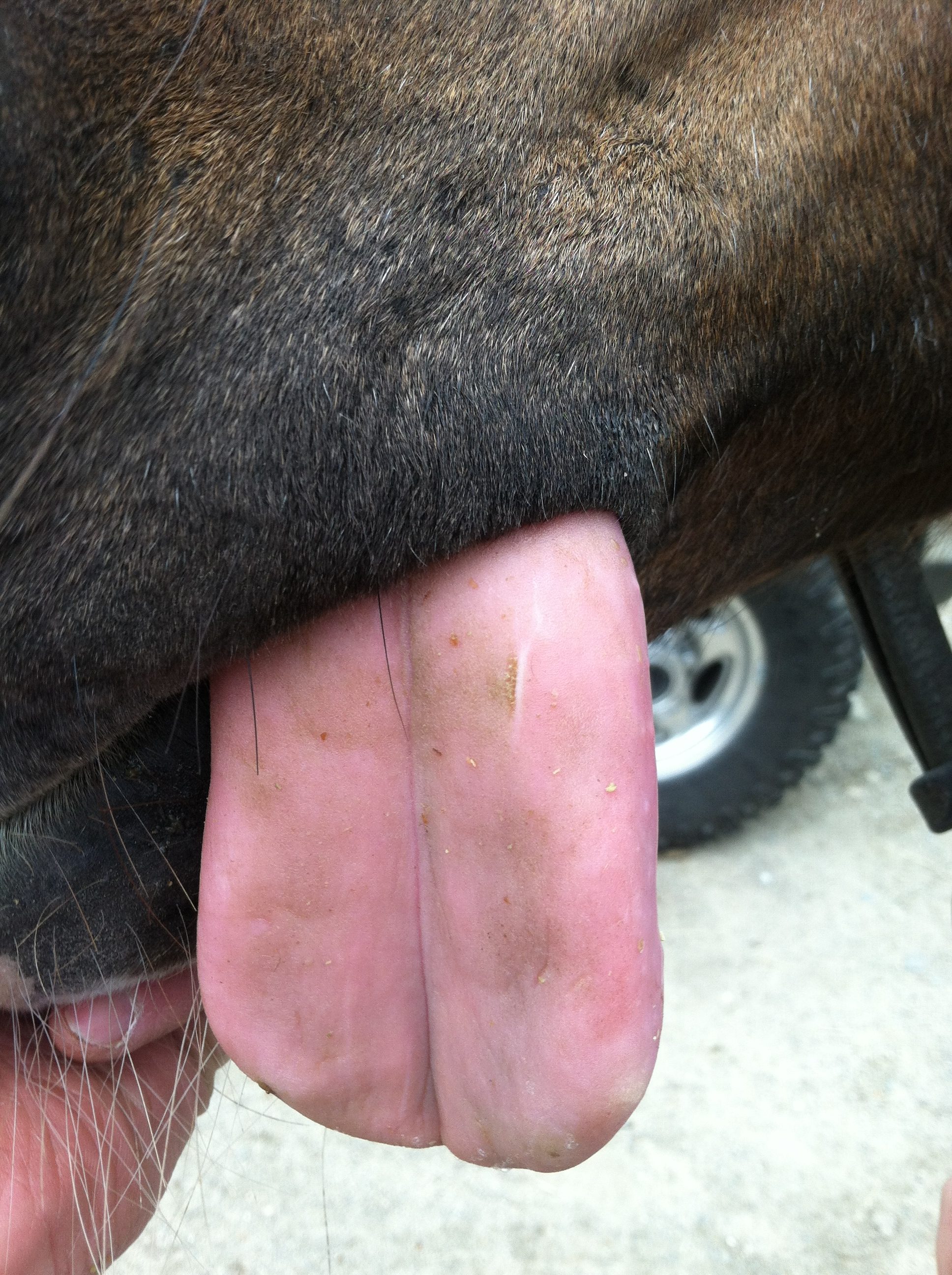 Botulism occurs in horses as a result of the action of potent toxins produced by the soil-borne, spore-forming bacterium, Clostridium botulinum. Horses can be exposed to this soil-based toxin via wounds, or ingestion of preformed toxin produced in decaying plant material, including improperly preserved hay or haylage, or animal carcass remnants present in hay. Botulinum toxin is the most potent biological toxin known and acts by blocking transmission of impulses from nerves to muscles, resulting in muscle weakness progressing to paralysis, inability to swallow, respiratory paralysis, and frequently, death. Although more common in the Mid-Atlantic, we have seen numerous cases of Botulism in horses in New England including Massachusetts, New Hampshire, and Maine. We strongly suggest that any horse that is eating round bales be vaccinated for botulism! The vaccine schedule for a previously unvaccinated horse is a series of 3 doses of vaccine given at 4-week intervals and followed by annual revaccination.

Potomac Horse Fever (PHF) is a bacterial infection with a complicated life cyle. Various water-loving flying insects are involved, and when horses eat the insects which are infected with the bacteria, they can become infected. Signs of PHF include fever, anorexia, diarrhea/colic, and worst of all, severe laminitis. The vaccine is not completely effective at preventing disease, but, in our opinion, it does significantly lessen the severity of signs if the horse does become infected. We recommend this vaccine be given once yearly to any horses in this area who live in a marshy environment, or with access to ponds or other wetlands. If you routinely travel with your horses to more endemic areas, such as PA, VA, DE, MD (Potomac River area), we recommend yearly vaccinations for these horses as well. The best time of year to vaccinate is late spring or early summer, before the water insects hatch.

Lastly, we are occasionally asked about performing antibody titers instead of vaccinations. Here is the statement from the AAEP: “The use of antibody titers or other immunological measurements to determine if booster vaccination is warranted is not currently practiced in the horse as standardized tests and protective levels of immunity have not been defined for most diseases. A correlation between antibody levels and protective immunity under field conditions has not yet been identified.” 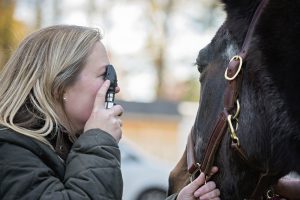 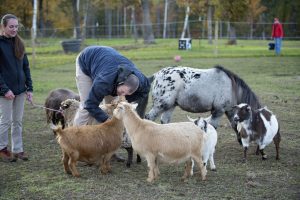